SERENGETI WILDEBEEST MIGRATION: WHAT YOU NEED TO KNOW

The wildebeest migration is a seasonal movement of millions of wildebeests, thousands of antelope-gazelles and zebras from the great Serengeti National Park in Tanzania to Maasai Mara Game Reserve in Kenya, in search for water and pastures.

Most part of migration take place in the Serengeti National Park, between the months of December until May the migratory herds spend their time in the southern east corridor of the Serengeti National Park. Presence of short and green pastures in Lake Ndutu and Naabi Hill attracts more herds to settle and graze, dozens of calves are born during this natural spectacle, while on the other side, bunch of them are killed by predators. 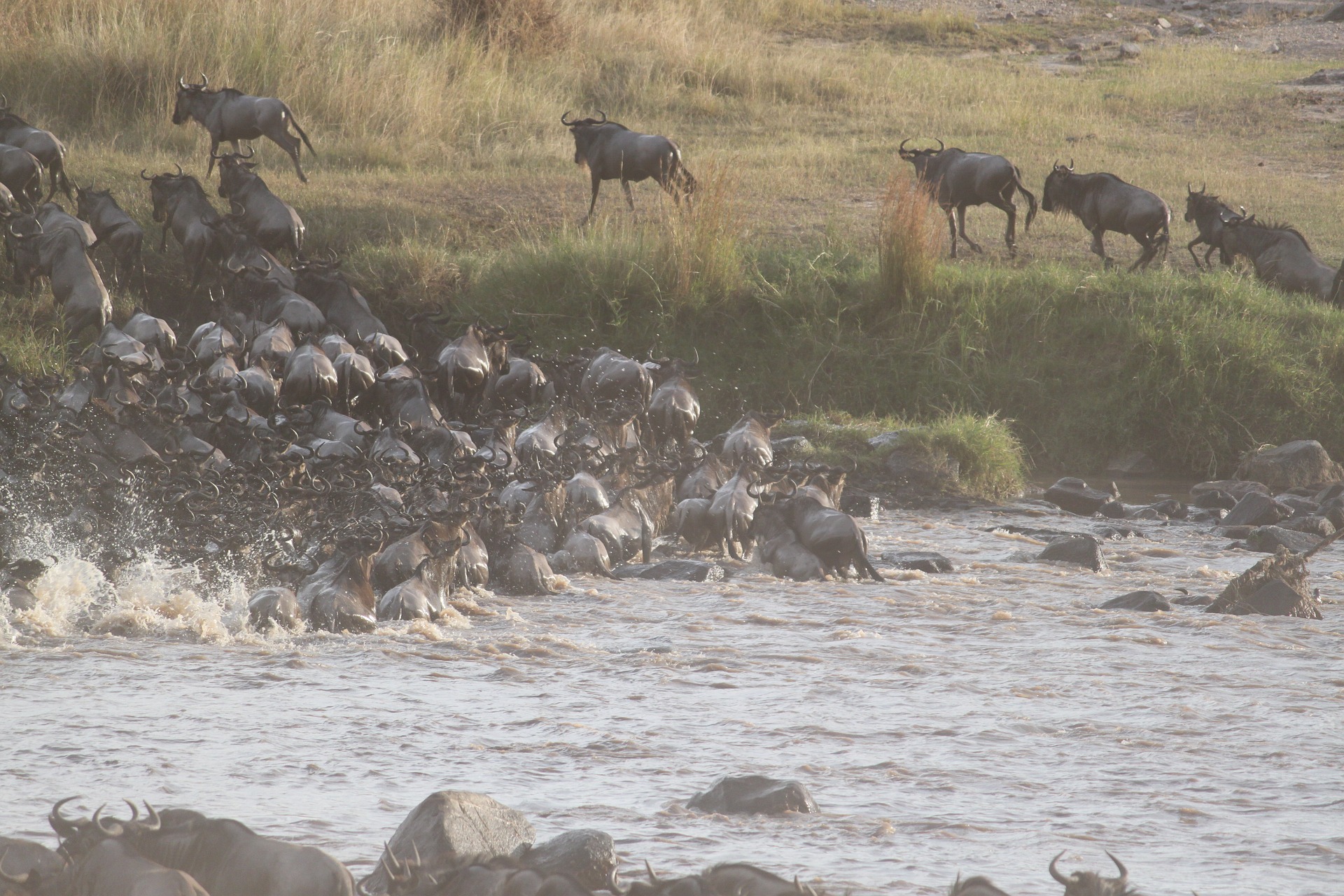 Inexplicably despite their search for water, the migratory herds swings northwest just before Lake Victoria, heading into Maasai Mara-Kenya during September and October, then they heard southward again toward Tanzania side into Serengeti National Park and the cycle continues.

This natural phenomenon has attracted a number of studies trying to establish factors for migration. Unfortunately, there is no definite conclusion as to which factors triggers the movement of large groups of animals moving from one place to another.

However, some studies suggest that, the migration is triggered by the presence of rainfall, such that, herds move with rainfall cycle.

This spectacular natural phenomenon teaches a big lesson to humankind. During their movements, consideration is given to calves and weaker members who are put at the middle, with a view of protecting them from predators. This suggests that, animals are very considerate when it comes to the weak and vulnerable, the position that is advocated by humanitarians and men of God for the betterment of this world. 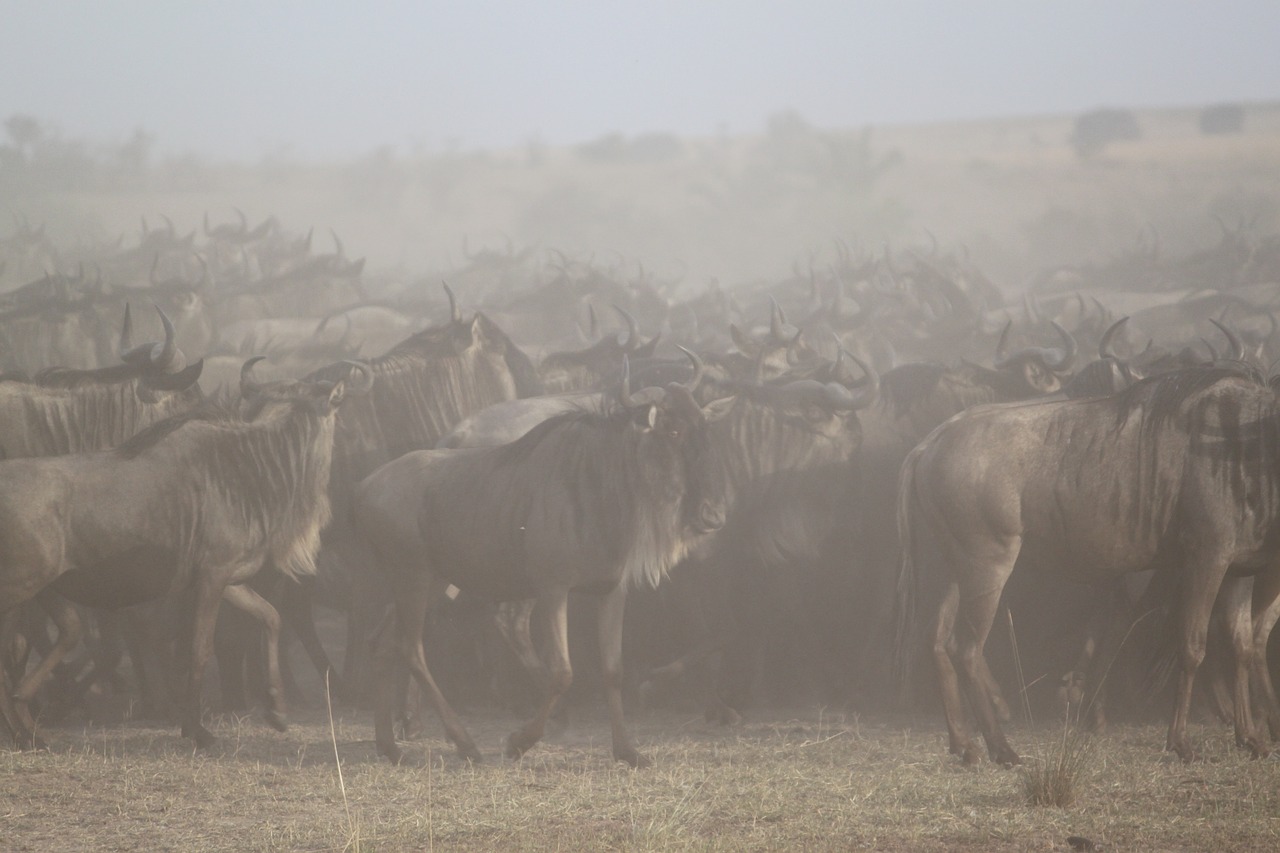 Challenges during the migration

It is not an easy task for migration member to complete the circle. Along the way, they encounter a number of setbacks such as crossing flooded rivers, where as many animals will drown, calves will die or be lost crossing rivers and lakes. Equally, diseases, poachers, predators add up to challenges encountered by migration members which largely contributes to the reducing size of the herd.

The most spectacular views can be obtained when the herds cross Mara River, you will have a chance to spot gigantic crocodiles in the River Mara, rolling around in the water tearing apart wildebeest’s fresh.

The unforgettable and breathtaking scenes can as well be observed the moment the herds jumps from above banks of the river into water, during this moment many animals get injured and others even die, and become free lunch to the carnivores such as lions, hyenas, jackals, crocodiles etc. None of these setbacks prevent the migratory herds from keep on moving.

Who to take you to see Migration

If you think of travelling to Serengeti National Park to see the wildebeest migration, think of Wildtaina Safaris, a registered tour operating company in Tanzania ready and willing to making your Safari experience memorable. We know the language, the laws and the culture of Tanzania, above all, we are professionals knowing what we are doing and what is expected from us, therefore, choosing working with us will not be a regrettable decision.

We make sure that there is value for money for every service that we render; we have a passionate, dedicated, innovative and experienced team to serve you. We have competitive and affordable tour packages prices to suit your budget. We can also arrange a tailor made package to suit your plan. Therefore, when you think of travelling to Tanzania, think of Wildtaina Safaris.